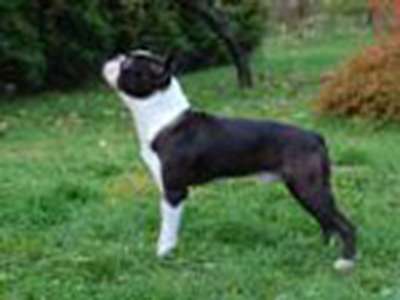 The Boston Terrier is a gentle, quiet breed with a striking black and white colour combination. It is not technically a true Terrier – and certainly it does not generally display the stubborn, excitable nature of one – but instead prefers a quieter, less active life that suits it well to an older or less active owner.

During the 1800s, was bred down in size from a mixture of bull and terrier pit-fighting dogs, which were subsequently interbred with French Bulldogs. It has the distinction of being the first non-sporting breed to be produced in the USA, and is named after the area where the breed originated.

It is a compact, smooth-coated dog with a short muzzle, standing up to 38 centimetres high. Its colouration is predominantly black, but often brindle and seal, and is always marked with white on the chest, blaze and muzzle. The coat is short and requires minimal care.

While it can suffer from common dog aliments (cataracts, slipping patellas and arthritis), the breed is also prone to a variety of eye problems. They can suffer from breathing difficulties when stressed or when they over-exert themselves. Terriers can also snore, drool and produce gas.

The Boston Terrier isn’t as hardy or as rigorous as other breeds, and as such they can require more health maintenance than other types of dogs. Due to their particular anatomy they can have difficulty breathing in inclement weather or when exercised too hard. A careful diet is also recommended of this breed. For all of these reasons a Boston Terrier should be treated to regular check ups.

A whelping Boston Terrier will also often require aid via a caesarean section.

Health concerns aside, the Boston Terrier makes an ideal house dog. They are gentle, quiet and on the smaller side. It is an affectionate breed and likes to be part of a family.

Care must be taken to ensure that even with a placid, gentle-natured breed, the right training and bonding occurs. While they lack the pugnacity and zest of some true terriers, they can still develop problems if raised inattentively.

As the Terrier is a less active and boisterous breed, the owner’s tone of voice is important. Overly loud or negative tones are not the best for this sensitive animal. Confident, firm commands and clear leadership will provide excellent structure for the pet. The Terrier socialises well with humans and other pets, and is generally good with children due to a quiet and affectionate nature. Inadequate socialising can display itself in competing for affection with other pets.

This breed can develop some problematic behaviour, such as Small Dog Syndrome, human induced behaviours, or becoming dominant. It can also become overly protective of owners and pick fights with other dogs. When bored, the pet can become highly-strung and flighty.

A patient owner can successfully train a Boston Terrier, as while they are quite intelligent they are reportedly slow to learn. In terms of exercise, they are low maintenance – generally a run around the backyard or a daily walk will suffice. This makes them adaptable to a variety of owners, from someone who prefers an armchair companion or a young family who would like a more active playmate.