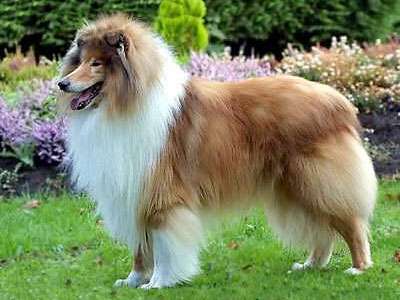 The Collie Rough is instantly recognised as being the breed that was used in the Lassie films. The breed is a great all-rounder and makes a good working dog as well as a family pet and a loyal friend. Because of its gentle nature, the Collie Rough is often used as a guide dog for the blind.

The Collie Rough originated in Scotland and was primarily a working dog for several centuries. The early Collie Roughs were smaller and head broader heads than can be seen today and were used to herd cows and sheep as well as for water rescue. It is believed that the breed was named after a type of black faced sheep called a Colley. The Collie was mixed with the Borzoi in the 1800s and working dogs became separated from dogs that were breed as pets. The breed became popular as a pet in 1860 when Queen Victoria kept a number of Collies at Balmoral Castle. The first Collie was presented at a dog show in the same year and the Collie Rough was recognised by the American Kennel Club in 1885.

This large, strong and lean breed has a flat top of the skull and arched eyebrows. The wedge-shaped head features a rounded muzzle, which tapers to the back of the nose and features a slight stop. The eyes are medium-sized and almond shaped and although they are usually dark, in some cases the eyes may be blue or one eye may be dark and the other blue. The tail is just slightly shorter than the body and features an upward twist. The rough coat is long and forms a mane around the chest and neck and can come in a range of colours including white and sable, black, tan and white and blue merle.

The Collie Rough is an extremely intelligent and loyal breed and is easy to train. The breed gets also with other animals including other dogs and makes a great family pet. Because the Collie Rough was originally a herder it may try to herd humans and especially children if not kept in check. With careful training the Collie Rough takes well to new people and although the breed has the tendency to be protective, its sensitive and gentle nature means that it can easily be won over if it is shown affection.

Although the Collie Rough is generally a very healthy breed, some dogs are prone to eye defects, PRA and hip problems that can lead to arthritis and lameness if not addressed. The Collie Rough is sensitive to the sun and sunblock should be put on its nose in the summer months.

The Collie Rough is fairly inactive indoors and although it can live inside comfortably, it needs plenty of exercise during the day including a garden to run around in. it is important to remember that the Collie Rough is sensitive to the heat and during warm weather it needs to be provided with fresh water and lots of shade.

The Collie Rough needs a long walk each day and plenty of opportunities to play games. Weekly brushing is needed to keep the breed’s stiff coat in good condition, although care should be taken during the two times each year when the dense and soft undercoat is being shed.