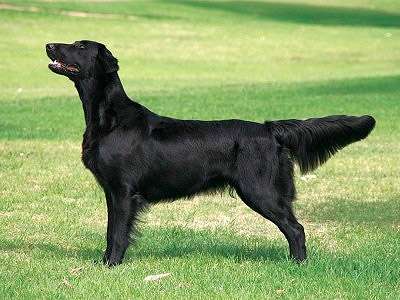 The Flat Coated Retriever was developed at the start of the 19th century and was originally considered to be a type of Labrador. The breed descends from the Labrador, Irish Setter and Newfoundland and was once very popular. This breed was originally used as a hunter and a fisherman and has a superior sense of smell and makes a good bird dog. The American Kennel Club recognised the Flat Coated Retriever in 1925 and other skills associated with it include retrieving, tracking and agility.

This beautiful breed is medium sized to large and features a long head that has a relatively flat skull. The Fat Coated Retriever has a long, strong and deep muzzle that has a gradual and slight stop, while black dogs have a black nose and liver coloured dogs have a brown nose. The teeth come together either in a level or a scissors bite, while the almond-shaped eyes are medium sized and are either hazel or dark brown. The ears are well feathered and fairly small, while they hang to the sides of the head. The chest is wide and deep, while the back is square and rather short. The thick and fine coat is medium in length and lies flat to the body being solid black or solid liver in colour with feathering on the tail, legs and chest.

This breed has a friendly and loyal temperament and is excellent with children. If the dog is introduced to the family early it will serve as a constant companion and will be friendly to strangers and not aggressive. Although the breed loves to play at any opportunity it usually reserves playful behaviour for outside and is well behaved when inside. Although the Flat Coated Retriever loves to play it has a fairly short attention span and training sessions should be kept short and varied as much as possible in order to achieve the best results. The breed prefers a lot of contact with humans and should not be left alone indoors for a long period of time. if the Flat Coated Retriever is left alone for too long and feels neglected it can become destructive and show other signs of behavioural problems. A firm hand is needed when the dog acts out to keep it under control.

The Flat Coated Retriever is prone to developing cancer as well as diabetes and epilepsy, while hip dysplasia and PRA are seen occasionally.

Although this breed prefers to live inside with humans, its large size makes it rather unsuitable for apartment life, where it tends to become inactive. A large house with a garden is the best environment for this breed so that it can live indoors and play outside whenever it needs exercise and stimulation.

In addition to long walks, it is best to give this breed a range of different types of exercise so that it remains stimulated. The Flat Coated Retriever is an excellent swimmer and will take the opportunity to swim whenever possible. The breed also makes an excellent jogging companion, although training is needed so that the dog jogs behind its owner rather than racing in front in a show of dominance. The feathered coat required weekly brushing and minor trimming from time to time.