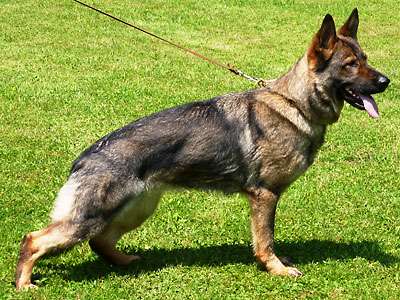 The German Shepherd dog is popular as both a family companion and as a working animal due to its loyal nature and multiple talents. Bred from herding and farm dogs, the German Shepherd was first shown in 1882, with the first official registration in 1899. Outside of Germany, the breed was recognised by the American Kennel Club in 1908.

Due to its working heritage, the German Shepherd makes an excellent herder, but is also widely used as a guard dog, guide dog and as a search and rescue dog. Frequently employed by the police and military, this highly intelligent breed also makes a wonderful show dog, agility competitor and family pet.

The German Shepherd is a focused and clever dog. As such it thrives on mental stimulation, and with strong leadership will demonstrate obedience and an eagerness to learn. Firm training is vital with this breed. If the animal does not understand its trainer is pack leader, behavioural problems such as shyness or aggression can arise. However, with confident training, the German Shepherd is a versatile dog with an excellent temperament.

The breed prefers company, so should spend limited time alone, and should be socialised from a young age. Training should begin early and adult dogs require in excess of two hours’ exercise per day. A disciplined German Shepherd dog is good with other pets and children, and will demonstrate immense loyalty to its trainer. A courageous dog, the German Shepherd will happily give its life to protect its human pack.

Origins of the Breed

The Phylax Society was formed in Germany in 1891 with the aim of standardising dog breeds. While the group disbanded in 1894, a number of its former members, including Captain Max von Stephanitz, continued to breed dogs. The German Shepherd was bred from various longhaired, shorthaired and wire-haired working dogs. These came from herding and farming backgrounds from the states of Bavaria, Thuringia and Wurtemberg, located in central and southern Germany.

Although dogs from the breeding programme were shown in 1882 and 1889, it was not until April 1899 that the first German Shepherd was registered by von Stephanitz. This dog was named Horand von Grafrath, and had formerly been called Hektor Linksrhein. After von Stephanitz bought the dog from a show in 1899, Horand von Grafrath became central to the breeding programme, and he established Verein für Deutsche Schäferhunde, or the Society for the German Shepherd Dog. There has been speculation that Horand von Grafrath was one-quarter wolf.

The German Shepherd has a well proportioned, muscular body that is slightly elongated. The head is in proportion to the body and the forehead is somewhat rounded. The nose is generally black, although some are blue or liver. The ears are pointed and upright, but in puppies may droop a little. The coat may be double, plush or longhaired and is most often in a combination of black, tan and sable. Feet are rounded and the tail is bushy, with its length reaching below the hocks.

Males reach a height of sixty to sixty-five centimetres, while females are fifty-five to sixty centimetres. Weight ranges from thirty-five to forty kilograms. Life expectancy is approximately thirteen years.

Only German Shepherds with black noses can be shown, as the other colours are considered a fault for the purposes of showing. Similarly, there are white, blue and liver variations in coat colour, but only dogs with standard black, tan and sable coats may be shown. While standards for showing vary, most countries will only accept shorthaired varieties.