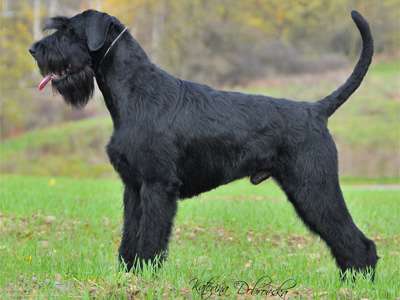 Well-known for their loyalty, even temperament and intelligence, a Giant Schnauzer makes a superb pet and is suitable for a family home, provided they are adequately exercised. A member of the Working Group, the Giant Schnauzer is the largest of the three Schnauzer breeds, with the Standard and Miniature Schnauzer being the smaller two. An ancient German breed which dates from at least the 1400s, Schnauzers were bred to be adaptable working dogs for agricultural tasks including herding and as a watch dog. As urbanisation grew, Schnauzers were put to work on an increasingly diverse range of tasks, particularly guarding shops, factories and other premises. Their resilience to adverse weather and their natural ability combined to make them a valuable and capable working dog.

Despite their name, Giant Schnauzers are not particularly large in comparison with other breeds; the average height of a Schnauzer is only around 26” at the shoulder. It is a solidly built dog which tends to look as long as it is tall. The coat is thick, coarse and wire-like; breed to withstand all weathers and allegedly to be resistant to rat bites, modern Schnauzers often benefit from living in a kennel, as in full coat they can get far too hot indoors. Traditionally the ears and tail were cropped and this is still undertaken where legal. A purebred Schnauzer will either be black or black flecked with white (salt-and-pepper).

As might be expected with a thick coat, considerable grooming, trimming and stripping is required to keep a Schnauzer looking presentable. A regular bath is a necessity and particular attention needs to be paid to the longer hair around their nose and mouth, which can frequently become soiled with food and drool. The Giant Schnauzer has enormous stamina and energy, so extensive exercise (two or more hours a day) is needed. If a Schnauzer is insufficiently exercised it can become bored and potentially destructive, so this must be taken into consideration when deciding to take one on.

These dogs have amazing personalities, being cheerful, loyal and bright. Provided they receive adequate exercise and stimulation, they make great family pets and their cleverness enables them to be easily trained both in obedience and for work or show events. Schnauzers do tend to try and be “top dog”, so a firm approach is needed to ensure it doesn’t try to dominate the household. They are not suitable for a timid dog owner or one who wants a canine “friend” rather than pet. Their natural ability to act as a guard dog also means they can be suspicious of and sometimes aggressive towards strangers. Introducing Schnauzer puppies to a wide range of people and environments quite early on can reduce this tendency somewhat.

Versatile and adaptable, Giant Schnauzers are easy to train provided the trainer is firm with them and doesn’t let them get away with disobedience. They do require considerable care and despite their robust appearance are prone to a number of different health problems, with their eyes and skin being particularly susceptible to a variety of conditions. The need to ensure a Schnauzer knows who’s boss is critical to ensuring its success as a pet or when undertaking training. A Giant Schnauzer that doesn’t know who’s in command is likely to be disobedient and even aggressive. Ensuring that the animal is clear from the outset that you’re the one in control allows its many positive traits to shine through and you will be delighted with this excellent dog’s pluck, loyalty and intellect.