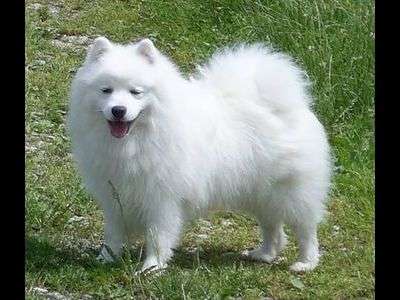 The Japan Chin es a quare, elegantly build dog with a proud attitude and rich hair. Male dogs reach a hight from 30 up to 38 cm, female ones are smaller, the weight is round about between 2 and 4 kg. The movements are graceful with lifting loads highly by the front legs. Its neck should be high and it should have a splendid cervical collar. The head is arched, the eyes round and deeply shining. The Japan Chin's wide and deep part of the snout shall connect to the nostrils like an upholsterer cushions. In profile the nostrils shall lie behind the line of the forehead. The small v-formed ears are highly set and lie close level. The legs are straight and are made of fine, but strong bones. The teeth must not be seen aswell as the tongue and should form a tongs set of teeth. The Japan Chin's hair is rich, smooth and silky. Shortly haired are only the face and the front side of the legs. The tail is especially splendid haired, which is torn above the back like a flower. The colour of the Japan Chin is purely white, the nose is always black.

This Japanese toy-dog is to be assumed Chinese originally. It could be a crossed product, in any case the Tibet Spaniel could be involved. Japanese breeders tried to form the Japan Chin smaller and smaller, they even gave it sake to drink with the intention to reduce the puppies' hight. The smaller the miniature dogs were, the worther they were. They were kept like birds in cages of bamboo and carried around in the long, colourful, florid dresses of the Japanese women, that's why they are also called "sleeve dogs". But those soft, slenderly pets had very little strength and resistance, so later they should become taller again.
The first Japan Chins, with those no breeding success had occured, came as a Japanese empress' present for the German empress to Germany in the year 1880. Because the look of the Japan Chin impressed the public very much, it was imported more and more from its homeland Japan. Both the exotic beauty and the character of the Japan Chin excites every lovers of small dogs. The Japan Chin is very inspiringly, joyful, always ready to play, but also watchful. Regular brushing and combing, by removing dead hair with roots, guarantees full development of the beautiful and fantastic hair.

Refering to standard descending from white German "Großspitz", appearing since the 1920s in Japan. Later imports from North America, Australia and China followed. This race was created for Japanese living circumstances. It is small, handily and friendly.

Family company dog.
Nature and behaviour
Intelligent, joyful, waky, "must not make noise". The Japan Chin (Nihon Supittsu) is a pleasant, social mate, who is watchful, indeed, but never barks too much. Against strangers it is friendly reserved, however, neither nervous nor shy.

A nice, always good-humoured Chin, who adapts to all living situations. Feels comfortable both in lively families in the country and with elderly people in cities who can walk with it a lot. The Japan Chin is lively, but not too full of life, this pet loves activity and attention, without requesting sporty action. This as appartment dog breeded Chin is uncomplicated and gives joy also to beginners. The long fur needs regular care.