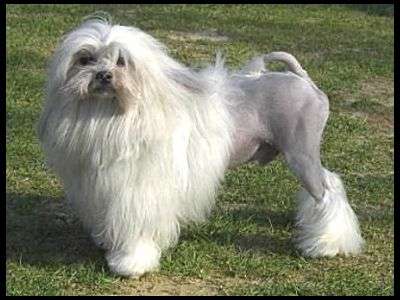 The Little Lion Dog is a French dog breed, which is also called the "Petit chien lion".
According to the FCI it is a companion and toy dog, section 1.3. That means, that it has a relationship to the Bichons. The Little Lion Dog is related to Maltese, Havanese, Bichon Frise, Coton de Tulear and Bolognese.
It is a very seldom dog breed, which you usually don´t see. Nevertheless it is a very popular dog for showings.

The Little Lion Dog was first seen in the mid ages. Already in the 13. century there were paintings of this dog races. The people then even made embroiderings in carpets of these dogs.
In the past it was a kind of fashion dog for the Royals. But after this time, the Little Lion Dog was very seldom to see. In 1965 there were only about 40 Lion dogs worldwide. Since 1976 the number of Little Lion Dogs increased again.

The Little Lion Dog is a very quiet and obedient little dog, which is very faithful to its owner.
This dog race loves walkaways, even if it rains, because it´s not hydrophobic.
The Little Lion Dog is a good dog for beginners, because it is easy to educate. Because of its obedient character, it is easy to teach some commands. Also this race loves children and likes to play with them. Even other animals or dogs are no problem for this silent dog. It is a good dog for flats, but they will also enjoy to have a garden. They love to be outside. The Little Lion is a good companion and lap dog.

The Little Lion Dog is a small dog. Its size is about 26-32cm high and its weight is about 6 kg.
Its a tough dog, which has a body similar to poodles. Their ears are appointed low and their tail is quite high. The tail is curved, but it is not allowed to touch the back.
The most specific detail on these dogs is their fur. In the back region the dog is bald. In the front region, that means on his chest and front-back, but also the face and ears it is bushy. Also the paws and tail is bushy. Its fur is waterproofed and allowed in all colours. The hair is long, a bit curly, thick and silky without undercoat. The owner of the Little Lion Dog needs a lot of time for its care.

The Little Lion Dog is a very popular dog for showings.
This race needs a lot of haircare. The owner has to comb it every day. Sleek hair is a must-have of this race on showings.
Also the eyes have to be clear without tear fluid on the parts around their eyes.
This dog has to walk on a lead very well, to impress the jury.
Because of its upright posture the Little Lion Dog has a big chance to win a showing.